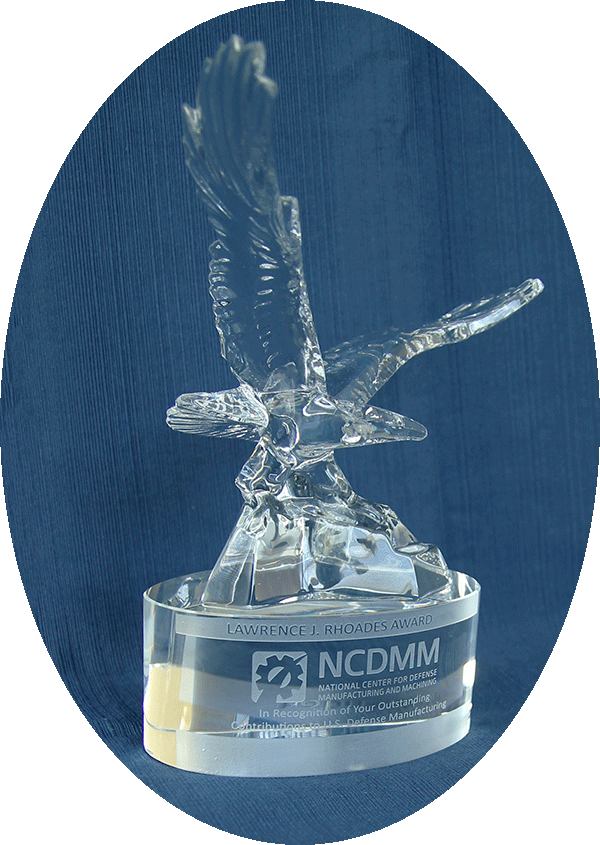 The NCDMM story would not be complete without mentioning Lawrence J. Rhoades, whose entrepreneurial spirit and dedication to the advancement of manufacturing processes was known industry-wide. Larry was also one of one of the founding fathers of the NCDMM, and an inaugural member of the Board of Directors where he served until his untimely death in 2007.

Larry left a profound and indelible mark not only on the manufacturing industry, but also here, at the NCDMM. Every day, each of us is reminded of Larry upon entering NCDMM headquarters in Blairsville where a magnificent Bald Eagle statue sits. It was a gift from Larry to the NCDMM not long after our founding.

That Bald Eagle serves as a daily reminder of not only a symbolic representation of our great nation and the freedoms it affords, but also the entrepreneurial spirit of Americans that Larry so believed in and exhibited.

To honor Larry’s legacy, the NCDMM named an award, its highest honor, in his name and with the award depicting an Eagle.

Each year at our annual SUMMIT event, the NCDMM awards the Lawrence J. Rhoades Award to an individual who or organization that shares Mr. Rhoades’ tireless commitment, futuristic vision, and unwavering dedication to the manufacturing industry.

Larry was the founder and CEO of the

Extrude Hone Corp. and the ExOne Company. He held a bachelor’s degree in economics and mechanical engineering from Brown University and a master’s in business from Northwestern University.

Larry was equally recognized and renowned as an entrepreneur, innovator, visionary, and manufacturing and machine tooling trailblazer as he was a philanthropist.

Larry held more than 200 patents, developed 30 inventions, authored countless published works, and led Extrude Hone and Ex One to industry success.  He was a well-known supporter of the Pittsburgh Symphony, serving on its board of directors for 10 years. He also served for four years on the board of directors of the Pittsburgh Vintage Grand Prix Association and was involved with the organization for 15 years, which supported such charities as the Autism Society of Pittsburgh and the Allegheny Valley School.

Awardees Through the Years

Brett B. Lambert
Former Deputy Assistant Secretary of Defense, Manufacturing and Industrial Base Policy and Executive in Residence at Renaissance Strategic Advisors

John B. Byrd III
Former President of AMT – The Association For Manufacturing Technology